A 2,200-year-old tomb has been discovered completely intact in central Italy, revealing the remains and ornate possessions of some 30 Etruscans, members of the ancient civilization that ruled the region before the rise of Rome.
The find was unearthed earlier this month by a team of amateur archaeologists working in the woods of Tuscany, 70 miles (115 kilometers) south of Florence.

The 6.5-foot long (2-meter-long) carved stone chamber contains dozens of urns full of human ashes, a typical burial method of the Etruscans, said Andrea Marcocci, an archaeology student at the University of Siena who discovered the site and directed the excavation. END_OF_DOCUMENT_TOKEN_TO_BE_REPLACED

The Etruscan tomb was hidden in such a remote corner of Tuscany that Andrea Marcocci, the archaeology student who found and identified it about a decade ago, was not very worried that anyone else would stumble upon it.

Then, this year, woodsmen began to clear brush in the area, and Mr. Marcocci — who had believed the tomb would be safe as long as it was concealed in a forest — realized he had to act.

Armed with a permit from the archaeological authorities (in Italy, anything found underground belongs to the state), he and a handful of volunteers began to dig.

What they found last week was a complete surprise: a tomb dating back more than 2,000 years with a cache of almost perfectly preserved ceramic and bronze funerary objects, including cremation urns for more than two dozen people. END_OF_DOCUMENT_TOKEN_TO_BE_REPLACED

ROME, Italy (Reuters) — Archaeologists have discovered a more than 2,000-year-old Etruscan tomb perfectly preserved in the hills of Tuscany with a treasure trove of artifacts inside, including urns that hold the remains of about 30 people.

The tomb, in the Tuscan town of Civitella Paganico, probably dates from between the 1st and 3rd centuries B.C., when Etruscan power was in decline, Andrea Marcocci, who led digging at the site, told Reuters.

“It’s quite rare to find a tomb intact like this,” said Marcocci, who had suspected one might exist in the area after work on a nearby road scattered pieces of artifacts.

“When we found fragments outside, we thought we would find that the tomb had been violated. But the main burial room was completely intact.”

Inside the tomb, a narrow corridor led to a small burial chamber, about 2 meters long and 1.79 meters wide, he said. It housed about 80 objects including vases and mirrors in bronze and ceramic. Urns holding human remains were also found.

“It’s quite exceptional to find so many objects in a tomb so small,” Marcocci said. “Some of the vases (urns) were fairly small, so we think they were probably for children.”

One of Italy’s first and most mysterious civilizations, the Etruscans lived north of Rome in present day regions of Tuscany and Umbria. Their civilization lasted for about 1,000 years, reaching its height roughly from the 7th to the 6th century B.C., before its cities were replaced by Roman settlements.

Much of what is known about the Etruscans derives from other lavish burial sites, decorated with paintings and filled with vases and other objects. 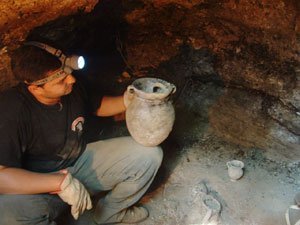